Joseph and Valentina have been a mystery for many years. We didn’t even know their names until a couple of years ago when a friend of mine suggested ordering Jacinto‘s Social Security Card Application. I highly doubted they would be there. I couldn’t find the names of Jacinto’s parents anywhere. What I did know from stories told by Jacinto to my uncle Joe, was that Jacinto was orphaned when he was young, and ended up living with an uncle in Bee County, Texas. In 1910, Jacinto is enumerated in the 1910 United States Federal Census with his uncle Juan Piña, Juan’s wife Santos Pena, and their children Anastacia, Luciano, Tiadora and Julia in Bee County, Texas. This made sense because we did know that Jacinto’s middle name was either Piña or Pena. According to one of Jacinto’s daughters, Jacinto’s father left Jacinto and his mother when Jacinto was about nine years old. If this is the case, then Jacinto’s mother must have passed away some time between 1904 and 1910. Death records are pretty scarce for the area at that time, so no luck there so far. At this point even after trying to look further into the families of Juan and Santos, we weren’t finding names for Jacinto’s parents. Since Jacinto’s social security card application wasn’t online at the time, I decided to order it. If it wasn’t there, at least we’d know. By the time it arrived in the mail, I’d talked myself so much into believing that the names wouldn’t be there, that I hardly wanted to open the envelope!

There they were, Josoph Rodriguez and Valentine Piña. We finally had names. Jacinto’s mother was a Piña, not a Peña, so Juan must have been her brother. At this point, I thought we were going to just break this brick wall down and start cruising. I hadn’t at that point considered the fact that Joseph Rodriguez isn’t exactly a rare name. We were able to find a marriage record for Jose Rodriguez and Valentina Piña who were married on September 20, 1894 in San Patricio County.1“Texas, County Marriage Index, 1837-1977,” database with images, FamilySearch (https://familysearch.org/ark:/61903/1:1:QK8B-8LLR : 22 December 2016), Jose Rodriguez and Valentina or Valentine Pina, 20 Sep 1894; citing San Patricio Co., Texas, United States, county courthouses, Texas; FHL microfilm 1,013,273.

We were also able to find a baptism record that I believe to be Jacinto’s. The mother’s name is a little off, but the woman I spoke to at the archives said that it’s possible that this was due to a language barrier. One thing that is interesting about it is that his Godparents were listed as Ramon and Julia Sanchez. We do have several DNA matches connected to a Ramon and Julia (DeAnda) Sanchez. 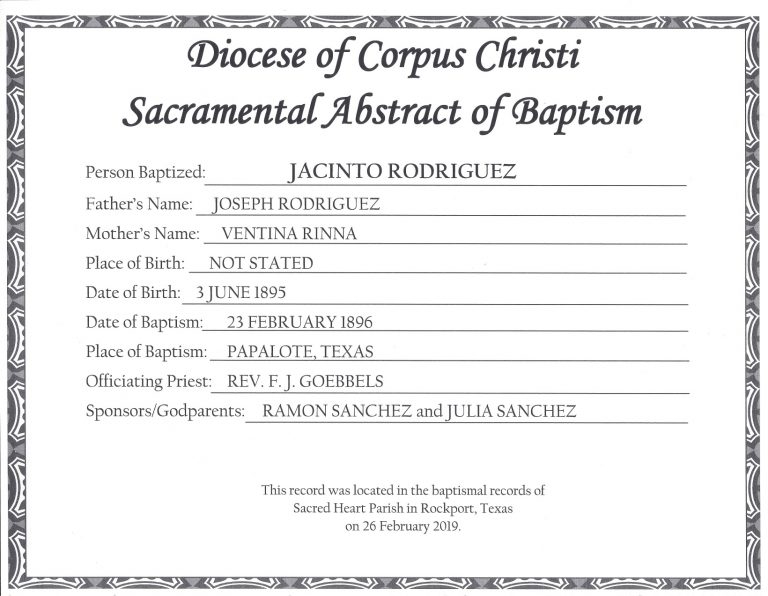 With the information we have so far along with DNA, we’ve been able to get a pretty good idea of what Valentina’s side of the tree should look like. What we don’t know, is when she died or where she was buried. We also haven’t been able to find them anywhere in the 1900 Census.

Joseph on the other hand, is still a mystery. I think finding them in a 1900 census would be helpful because at least then we would have a better idea of when Joseph was born. I’m continuing to look into the DNA, but there seems to be some endogamy, so that will make it more difficult.

If you have any information about the families of Joseph Rodriguez or Valentina Piña, please contact me and let me know!

If you are connected to this tree and already have a login, clicking on any of the names above in bold will open up that person’s page in the family tree in a new window.

Jacinto was my great-grandfather. If you are related to someone mentioned in this post as well and would like to see all of my research and photos, you can do so by registering for a login. Be sure to add a note mentioning who you are connected to and how, so I can connect your log in to your place in the tree.